Blog of a novice bee-keeper

The email popped up in my inbox. At last — our box of bees was ready for collection! The box, or ‘nucleus’, as it is properly named, would contain five honeycomb frames covered in thousands of female worker bees, a few males (drones), one queen bee and cells full of baby bees (brood). The queen is the most important bee in the hive. She’ll spend her life laying eggs in the honeycomb cells. The eggs will hatch into larvae and eventually grow into adult bees. And, as you’ll read in Bee Boy — Clash of the Killer Queens https://www.amazon.co.uk/Bee-Boy-Clash-Killer-Queens/dp/0192763873 — no queen, NO HIVE!

It was a swelteringly hot day and I panicked slightly as the traffic came to a standstill on the M25. Thankfully, we got moving again and I was soon able to deliver my nucleus to the bottom of the garden where we plan to keep our hive.

We cut the tape that was sealing the little door on the nucleus and bees zoomed out into the sunshine with an angry buzz. I guess they were hot and bothered after their long journey but I propped the door open with a piece of wood and they soon calmed down.

We chose Buckfast bees https://en.wikipedia.org/wiki/Buckfast_bee because they are famous for their calm nature. Ideal for two novice bee-keepers! If you look closely at the video you will see that one of the bees has full pollen sacks on her legs (little yellow lumps). The door had only been open a while so our Buckfast Bees seemed to be getting to work quickly. What clever little insects!

We moved the hive slightly and slid the nucleus into place so that the door of the nucleus was exactly where the door of the hive would eventually be. The nucleus was now left for 24 hours while our bees got their bearings and were able to develop a map in their little bee brains of where their new home was situated and also the position of the nearest food supply. There is an oilseed rape field still in flower across our lane and it didn’t take our bees long to discover this bright yellow larder. We stood by the hive and watched them make a beeline straight for it!

The only thing left before leaving our bees, was to offer them a shallow dish of water. Our bees were thirsty after the long drive.

The following morning I helped my neighbour with his bees (read about searching for queens and queen cells in next blog) and, in return and because he’s an experienced bee-keeper, my neighbour helped us transfer our bees into the hive.

When working with honeybees, the first job is to light the smoker. 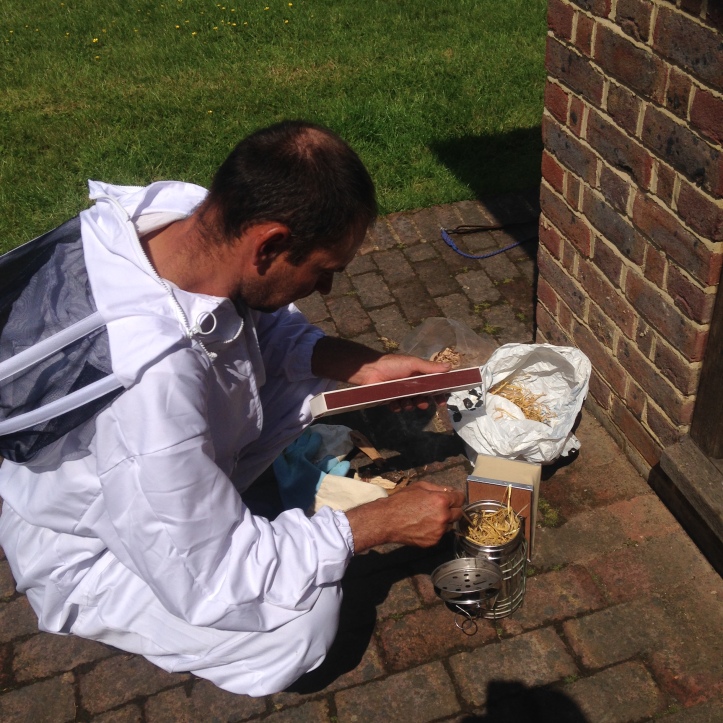 Puffing a little smoke over bees calms them and makes working in and around a beehive much easier. In Bee Boy — Clash of the Killer Queens, it is smoke from the smoker that shrinks Melvin to the size of a bee and transports him into the hive. Mysterious, magic smoke!

We were delighted to hear that our nucleus was in excellent condition — packed full of workers, drones, brood and a queen. BS Honey Bees had done a great job. The queen was easily spotted and looked healthy and happy (as far as we could tell). The frames were lifted into the hive which was then moved back into position so the door of the hive was now where the door of the nucleus had been. 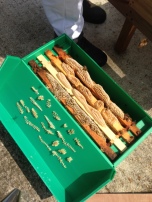 The transfer went smoothly and the bees seemed to settle quickly. The last job was to put an empty ‘super’ on top of the brood box (see previous blog for explanation) and fill the feeder with sugar syrup.

This will feed the bees while they sort out their new home. In a few weeks, when the bees have filled all the frames in the brood box with honey, pollen, and brood, we’ll put a super, filled with frames, on top of the brood box. The workers will fill these frames with honey. A queen excluder (see previous blog for pic of this mesh layer) will lie between the brood box and the super to stop the queen from moving up into the frames above and laying eggs. That way, the super will be filled honey frames only. Clever stuff!

In the meantime, our new hive seems to be full of happy bees.

The only thing I’m slightly worried about is the enormous hornet I spotted circling around the hive earlier this morning. Hornets and wasps are deadly enemies of the honeybee. You’ll find out all about them in Bee Boy — Clash of the Killer Queens ! 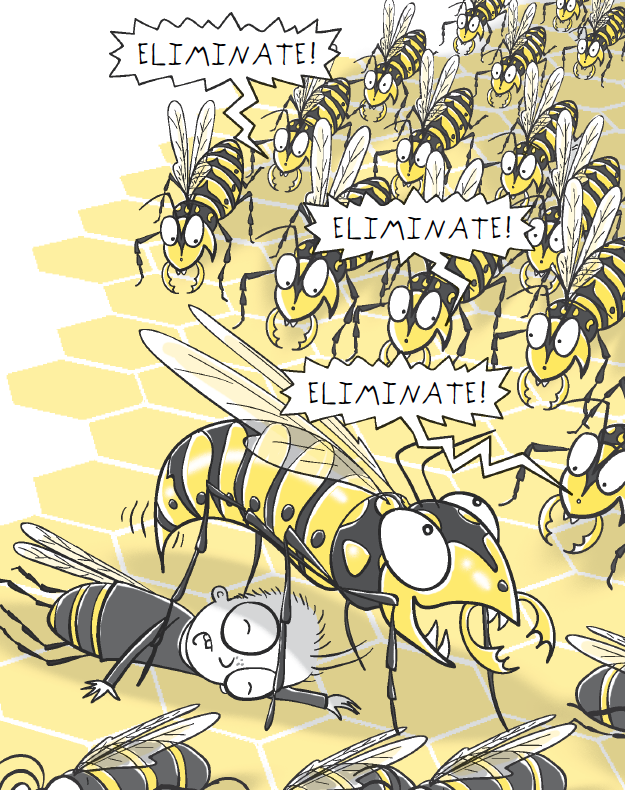 I am now holding ONLINE CARTOON ILLUSTRATION WORKSHOPS with Authors Aloud. Click on the link to find out how your class can draw with me and learn lots of cartoon-illustration tips along with stacks of Horrible Science facts.